Abstract
Purpose: The purpose of this study was to investigate the exercise effect of two types of training with a recumbent cycle ergometer on ankle muscle strength (dorsiflexor strength, DFS; dorsiflexor strength/weight, DFS/kg; plantar flexor strength, PFS; and plantar flexor strength/weight, PFS/kg) in healthy male subjects.
Methods: Twenty-three healthy males (27.91±8.66 yr) were randomly allocated into two groups (high-intensity interval training (HIIT), and aerobic exercise training (AET) after the first measurement. The subjects were trained for 24 sessions (40 min/rep, three times/week) and ankle strength was measured for a second time. Two-way mixed model analysis of variance (ANOVA) was used to identify significant differences between changes in ankle muscle strength between before and after training (within factors) in the HIIT and AET groups (between factors). The statistical significance level was set at α=0.05.
Results: In both HIIT and AET groups, all variables of ankle muscle strength were significantly increased after training compared to before training (p=0.001). However, there were no differences in all variables of ankle strength between the HIIT and AET group (p>0.05).
Conclusion: Both types (HIIT and AET) of recumbent cycle exercise training could be effective training methods to increase ankle muscle strength in healthy individuals, and the HIIT type with high intensity and low frequency pedaling could be recommended more to strengthen ankle muscles.
Keywords : Aerobic exercise, Ankle strength, High-intensity interval training, Recumbent cycle

Cycle exercises for a certain period can be effective in the improvement of muscle strength and endurance around the hip, knee and ankle joints.3,4 Since ankle muscle strength is reported to be a major factor that affects dynamic balance, walking speed, and the incidence of falls in various populations,6,7 the improvement of ankle muscle strength can contribute to the improvement of the quality of life and the reduction of potential in juries. Studies on the exercise effect of cycling in an upright or slightly forward-tilted sitting position have been common.8,9 Indoor cycling exercise is widely used to improve muscle weakness because the joint range of motion and muscle contraction patterns during exercise are constant and repetitive.8 However, there are almost no studies on the effects of recumbent cycle ergometer training on ankle muscle strength according to the two recumbent cycle ergometer training methods, HIIT and AET.

For this study, healthy male subjects with no experience in recumbent cycle ergometer training at normal times were recruited.10,11 Twenty-four university students and school personnel who were currently attending or working at a university in Chungnam applied. Written consent was obtained from those subjects who expressed their intention to participate in the study after an explanation of the study. The study was received with approval from the Hoseo University Institutional Review Board (1041231-211019-HR-133-02). Those with metabolic diseases such as diabetes or endocrine disease, or disc or musculoskeletal pain disease were excluded. In addition, those who used exercise facilities or received exercise training for fitness within 6 months of the time of participation in this study were excluded. Out of the total 24 applicants, one who complained of discomfort during recumbent training was excluded, so that 23 applicants finally participated in the experiment. The participants were randomly assigned to the HIIT or AET group.

Comparison of subject characteristics between HIIT group and AET group 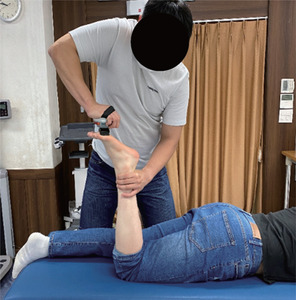 In order to determine the standardized exercise training intensity considering the differences in body weight and physical strength among the subjects, a built-in incremental load maximal exercise test was performed with tablet computer software connected to the recumbent cycle. The incremental load maximum exercise test is a ramp protocol in which exercise begins at a speed of 60 RPM under a load of 10 watts and the load is automatically increased by 10 watts every minute. The exercise test is terminated in cases where the subject is exhausted and stops exercise or fails to maintain a speed of 60 RPM or higher for more than 10 seconds despite maximum effort. The load at the end point was recorded as the MWL, and the exercise training intensity was determined as the percentage (%) of the MWL. 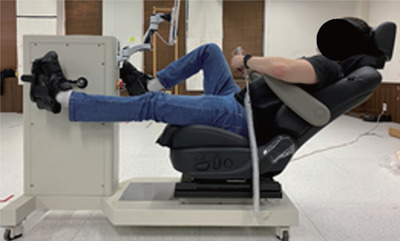 Light walking and simple joint exercise were performed for 5 minutes before the start of the main exercise.

Recumbent cycle exercise consisting of 40 minutes was performed. The detailed compositions of exercise training programs of individual groups are as follows.

(1) The HIIT group performed pedaling exercise in which a high load (100% MWL, 20 seconds) and a low load (10% MWL, 40 seconds) were automatically repeated for 40 minutes at a fixed speed of 20 RPM of the recumbent cycle.

(2) The AET group performed a pedaling exercise in which a load of 40% MWL was provided for 40 minutes at a fixed speed of 60 RPM of the recumbent cycle.

(3) Cool-down exercise: After 40 minutes of the main recumbent cycle exercise, light walking and cool-down stretching exercise were performed for 5 minutes.

Although the exercise programs of the two groups designed in this study differed in pedaling speeds and applied loads, the energy consumption per minute was designed to be the same, so that there was no difference in total energy consumption between both groups (Table 2).

All the data measured in this study were analyzed using the SPSS ver. 25.0 program. A one-sample Kolmogorov-Smirnov test was used to ensure a normal distribution of the data. Descriptive statistics were used to analyze the general characteristics of the subjects. Two-way mixed model analysis of variance (ANOVA) was employed to identify significant differences between changes in ankle muscle strength and ratio between before and after training (within factors) in each group (between factors). If a significant interaction occurred between the between and within factors, the simple effect was investigated using Bonferroni correction (α=0.05/4=0.0125). The statistical significance level was set at α=0.05.

In this study, 23 healthy male subjects performed different recumbent cycle exercise programs for 40 minutes/session, three sessions a week, for a total of 24 sessions for two months to compare the ankle muscle strength and ratio between before and after exercise programs and between the two groups (HIIT vs. AET).

The study hypotheses of this study were, first, “two recumbent cycle ergometer training methods, HIIT and AET, will contribute to the improvement of ankle muscle strength and ratio after exercises compared to before exercises”, and second “The subjects assigned to the groups for the two types of training programs will have different improvements in ankle muscle strength.” As a result of this study, the first study hypothesis was supported, but the second study hypothesis was not supported.

In this study, based on previous studies indicating that not only recumbent cycle exercise, which involves pedaling in a recumbent position, is recommended as an exercise therapy program for heart failure patients because it has a lower cardiac burden than pedaling in an upright sitting position.3,4 But it also has large effects in improving daily living activity functions because the muscle contraction pattern of the lower limb is similar to that of standing up and stair climbing.1 In addition, the lower cardiac burden in a recumbent position may have contributed to the improvement of ankle muscle strength while both the HIIT and the AET group were performing the exercises. Both HIIT and AET can contribute to the improvement of both DFS and PFS and ratio after the exercise programs.6,12 In addition, individuals can hardly continue AET at speeds not lower than 60 RPM because of the nature of recumbent cycle exercise that leads to muscle fatigue quickly due to the constant and repetitive muscle contractions of the lower limb extensor.1,2 Therefore, the HIIT exercise program in which the pedals are turned at a low speed of 20 RPM, provided that they are repeated with low loads and high loads as an exercise method, may be suitable for the elderly generation.

In previous studies on recumbent cycle ergometer training and lower body function improvement, 12 male subjects with severe heart failure (57.5±0.8 years) performed exercise training composed of 20 minutes of HIIT and 20 minutes of AET for 40 minutes/session for a total of 24 sessions. The isometric maximum strength of the knee joint extensor increased 18%.4 However, the difference between the exercise methods could not be identified in the previous study because two exercise training programs were applied in combination. In this study, when 23 healthy normal subjects were divided into two groups according to exercise method and performed training, all variables of ankle muscle strength significantly increased after training compared to before training.

However, the differences between the two training programs using the recumbent cycle were not significant in all variables of the ankle muscle strength and ratio in the two groups. These results suggest that the HIIT method can provide similar effects to those of AET as an exercise program for the prevention of falls of the subjects who can hardly maintain a pedaling speed of 60 RPM or higher. In addition, in the results of this study conducted with active subjects, it may be expected that the HIIT method can provide relatively similar effects to increase ankle muscle strength as the AET method.

The results of this study and previous studies identified that recumbent cycle exercise had significant training effects on the strength of ankle muscles among lower limb muscles. Given these results, it was identified that the effects of recumbent cycle exercise to strengthen both DFS and PFS and ratio were similar regardless of whether the HIIT method or the AET method was used, and the rate of increase in DFS was higher when the HIIT method was used. Given these results, the HIIT program, in which the pedals are turned at a low speed, enables the achievement of similar or greater effects in increasing ankle muscle strength compared to AET, in which the pedals are turned at a standard and constant speed of 60 RPM. Therefore, the HIIT program can be a recommendable training method for those elderly persons who refrain from exercise due to weak cardiopulmonary fitness.

There are limitations to this study. First, the small sample size that participated in the recumbent cycle exercise programs. Further study and a larger sample size are necessary. Second, only male subjects participated, so generalization of the study findings is limited. Third, variable functional effects such as balance ability and gait pattern were not included. Fourth, a surface electromyogram (EMG) was not used for the ankle muscle activities. Further study is necessary with the surface EMG to investigate ankle muscle activities.

In clinical conclusion, the HIIT and AET exercise programs were performed for 40 minutes/session, three sessions a week, for a total of 24 sessions. First, recumbent cycle ergometer training significantly increased the subject’s PFS and DFS compared to those before exercise with both training methods. Second, the HIIT and AET programs using the recumbent cycle showed no significant difference in PFS and DFS between the two groups that underwent their respective training programs.