Stroke is typically caused by a long-term lack of oxygen to the brain through a blood vessel bursting or clotting. Since this event usually occurs on one side of the brain, the effects are generally seen on the contralateral half of the body in the form of hemiparesis.1 In particular, a reduced ability to balance properly due to an increase in postural sway, asymmetrical weight distribution, and loss of weight shift cause an increase in the risk of falling and results in significant economic and social burdens.2 Decreases in upper and lower extremity function after stroke limit the performance of activities, such as self-care and locomotion.3 Individuals with hemiplegia as a result of stroke often have difficulty accepting and bearing weight on the paretic leg, hence they commonly exhibit asymmetry in standing and during ambulation with greater proportion of body weight being borne on the non-paretic leg.4 Asymmetrical weight bearing is shown in 79–87% of stroke patients, which is only 25–43% or less of their body weight. This disproportionate weight support is adversely affected by asymmetrical posture, and reduced balance ability.5

In addition, more than 50% of patients with hemiplegia experience long or permanently impaired arm function due to paralysis of the upper extremities.6 There were previous studies showing the beneficial effects of balance training with upper extremity exercise on balance performance in people who have had a stroke. Balance training with upper extremity movement caused a displacement of the center of gravity on stable and unstable surfaces, and on balance training-related gait such as the change of velocity and direction while walking, with resultant improvements in balance performance.7 The motor function of the affected lower limb was positively correlated with the motor function of the affected upper limb in patients with subacute stroke (r¼0.68, p<0.01).8

Previous studies showed that weight-bearing asymmetry (WBA) towards the non-paretic leg is common, and therefore training of weight-bearing symmetry has been a major focus in post-stroke balance rehabilitation.9 Training methods for balancing and symmetrical weight support, such as task-oriented exercise (10 tasks: walking on a treadmill; standing up, walking to, and sitting down on a chair; kicking a soccer ball against the wall; walking along a balance beam; performing step-ups; walking an obstacle course; walking while carrying an object; walking at maximal speed; walking backwards; and walking up and down stairs)10 and visual biofeedback training for symmetrical weight support11 have been studied. Facilitation of normal movement patterns and symmetry in weight-bearing are among the key principles of the Bobath concept and related Neurodevelopmental Treatment (NDT) such as sit-to-stand training.12 Functional weight support training was effective in balancing with the sprinter pattern of Proprioceptive Neuromuscular Facilitation (PNF), in which one arm is raised and the other leg goes up, such as reciprocal movement, and both arms and legs are also linked to alternating movements.13 It also facilitates effective movements by using irradiation for stimulation of strong and preserved muscle groups. This produces strong activation of weak muscles, facilitating muscle contraction in paraplegic lower extremities, which is important for weight support and balance. In other words, use of irradiation creates effective movements in the paraplegic lower extremities, which is important for weight support and balance ability.14 In other studies of body weight-supported treadmill training combined with ball-kicking and dual task training subjects showed significantly improved muscular strength, balance, and gait.4 Additionally, kicking a ball supported by the unstable leg increased the activity of muscles that control the mediolateral stability of the ankle post perturbation and balance through changes in postural-control strategies in chronic ankle instability.15

However, there were few studies showing the effects of kicking a ball on upper extremity function. There was a previous study showing that the virtual and real boxing training methods, in addition to neurodevelopmental treatment, are effective in improving upper extremity, balance, and cognitive functions in patients with hemiparetic stroke.16 There is study that the relationship between the upper limb motor function and activities of daily living after stroke is strongly influenced by lower limb motor function.6 Thus, this current study also wants to see how free arm movement affects balance when kicking a ball.

The patients was selected from among thirty patients in the hospital who were healthy and motivated to participate. Subjects understood this project and agree to participate in it. Kicking a ball is a skill that is available above a FAC level 3. The patient with the lower FAC level 3 was chosen because FAC level 2 was not enough to kick a ball among them. FAC level 3 was more appropriate to practice this task to improve balance. Before the training, Kicking a ball group tried to kick a ball with a ceiling mounted walking rail without weight support was used for safety and free movement of the arm. All subjects were performed five times a week for four weeks and follow-up test after two weeks (Figure 1). 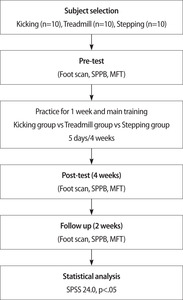 The stroke patients demonstrated impairments in balance during quiet standing and dynamic movement, body alignment, and muscle strength as well as visual dependence. These impairments affected his ability to function independently in the hospital and perform leisure activities.

The assessment tools used in this study are: the SPPB for static and dynamic balance, Foot scan hospital device for weight distribution, and MBI for upper limb function. These evaluations were performed three times (Pre-test, Post-test after 4 weeks, and Follow-up after two weeks). Short Physical Performance Battery (SPPB),17 the test-retest reliability of the SPPB over 4 to 7 days ranged from 0.83 to 0.89 in older adults. Validity showed that scores of <7 indicates significant increased risk of re-hospitalization or death (5.38, 95%CI)(https://www.sralab.org/rehabilitation-measures/short-physical-perfromance-battery) was used for the balance, The Foot scan Hospital (TechStrom Ltd,Korea) was used the weight distribution. By digitizing the pressure distribution between toe and heel, and between right foot and left foot, the balance is centered at 50%:50%. The patient stands for 10 seconds on a 384 mm×384 mm detector. It can also show foot length, width, toe angle (toe out), and Center of Pressure (COP).18 The numbers shown in Table 2 show the left minus the right weight distribution (Left 61%: Right 50.82%, 61-50.82=10.18% in pre-test). The smaller the number, the more balanced the weight is distributed on both feet. Manual Function Test (MFT) was used for upper limb function.19 This test consists of eight items, including the pegboard task, an item assessing dexterity. The total MFT score can range from 0 (severely impaired) to 32 (full function). The test-retest reliability coefficient and interrater reliability of the MFT were consistently above 0.95.19

The comparison of weight distribution ratio in each group (unit: %)

The training consisted of a 5 minutes warm-up, 20 minutes main training (Kicking a ball, treadmill, stepping), and a 5 minutes cooling down. The subjects performed stretching of the hamstring, calves sitting on the chair (stretch both legs with dorsiflexion), and iliopsoases (holding the table with healthy hand and unaffected leg forward with bent knee, and affected leg stretch to form a lunge position) with warm-up. All subjects repeated this 10 times on each leg. After main training, the subjects finished with cool down by pedaling a stationary bicycle (40 rpm) for five minutes. 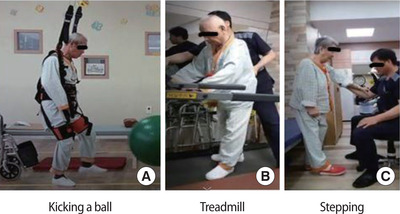 Treadmill group: The subjects walked on the treadmill. The speed increased gradually (Figure 2) from 4 rpm to 40 rpm.

Statistical analysis was performed using the SPSS ver 24.0. The normality of the distribution of variables among three groups was checked using the one-way ANOVA test. The significance of changes in weight distribution was determined using the repeated measures ANOVA (ANOVA group×time). Shaffe test was used for post-hoc test. The changes in functional status evaluation variables (SPPB and MFT) were assessed with the non-parametric Friedman test. The Wilcoxon was used for post-hoc test. The differences were considered statistically significant if the level of test probability was lower than the assumed level of significance (p<0.05).

The comparison of SPPB in each group (unit: point)

The comparison of MFT in each group (unit: point)

This study focused on a chronic stroke patient who performed kicking a ball with a ceiling mounted walking rail for balance and upper limb function. The main goal of training was to improve stable balance and upper limb function as it is one of the main factors that influences quality of life. A recent study of stroke patients reported that there was a change in muscle structure after gait training with kicking ball on a treadmill. The result of this study indicated that hip flexor, knee extensor, and dorsiflexor strength, balance, and Functional Gait Assessment (FGA) scores were improved in patients in both the Body weight supported treadmill training-Ball kicking (BWSTT-BK) and BWSTT groups. Furthermore, BWSTT-BK was more effective than BWSTT.20 It proved that kicking a ball was more effective for balance. After a ball-kick balance exercise, the activity of both the ventral and dorsal muscles decreased just before the kick among individuals with Chronic Ankle Instability (CAI), but the activity of muscles that control ankle inversion and eversion (Tibialis anterior and Peroneal longus) increased after the kick. Overall, these changes were associated with increased postural sway during the ball-kicking task. Although it is not applied to stroke patients, the stability of the ankle in weight support of the affected leg in this study is believed to have improved balance in this study.15

The results of the study showed that balance (SPPB) was significantly increased between pre-test and post-test and between pre-test and follow-up in Kicking a ball group. There was a previous study that showed whether single-leg balance ability predicted kicking performance on the other leg. These findings provide preliminary support for the importance of balance ability in kicking performance.21 Although it was targeted at athletes, it was shown that balance with single leg affected the accuracy of kicking a ball, and this study demonstrated that the single leg support balance ability for stroke patients improved through kicking a ball. In addition, Virtual reality (VR) training with the Xbox Kinect gaming system (kicking a ball, soccer) has been used as an effective therapeutic approach in stroke rehabilitation for improving balance and gait performed standing activities with a harness mounted to the ceiling.22 This study showed that Kicking a ball using VR improved dynamic balance in chronic stroke patient. Although weight support was not mentioned, but ball kicks in virtual reality proved to improve balance. Therefore, it is consistent with previous studies that this study also showed the results of improving the balance of kicking a ball.

The upper limb function in kicking a ball group showed that MFT was improved between pre-test and post-test and between pre-test and follow-up, especially shoulder flexion was increased from average AROM 60° to 100°. Effective upper extremity mobility requires stability between the pelvis and the trunk (core). According to changes in upper extremity function after core stabilization exercise, the shoulder abduction, the transport of cube, and pin-picking increased. This suggests that the reason for the increase in upper extremity mobility in this study was due to the role of core stability exercise.12 Weight support with kicking a ball ensures stability of the paretic leg, the core is also involved in balance. The core stability is considered to have improved the upper limb function. Previous studies reported that the effect of balance training with upper extremity exercise (PNF upper extremity pattern) improved balance performance in people who have had a stroke.7 In addition, kickboxing appears to be a feasible exercise activity to improve gait speed, and some clinical measures of balance and mobility.24 These studies prove that upper extremity function has played an important role in balancing, and this study also believes that balance has improved due to the improvement of upper limb movement during kicking a ball.