Ten patients were identified: who visited the exercise center for the disabled and regularly performed exercise; or who had been discharged after a diagnosis of spinal cord injury and who had stopped hospital rehabilitation. Target inclusion criteria were patients; with a score of >24 points on the Korea Mini-Mental State Examination; who could have a daily conversation; who could not stand up independently; who could sit in a seated position independently or with minimal assistance; without skin damage, such as bedsores; and who could flex their shoulders 90° by themselves. The study participants were informed of, and understood, the purpose, procedures, and methods of the study, and that personal information would remain confidential, and then agreed to voluntary participation. Study participants could withdraw, independently and at any time, their consent to participate. Three patients withdrew their consent to participate due to their high fear of falling, and seven patients successfully completed the study (Table 1).

A functional reach test was conducted using a motion analyzer (BTS Smart-DX, BTS Bioengineering, Italy) to find out how the elastic trunk aid functionally affected patients with spinal cord injury. The test performed in a sitting position in patients with spinal cord injury has proved reliable.9,10 In this study, a motion analyzer was used to collect data and objectively measure the horizontal movement distance in the sagittal and coronal planes.

The motion analyzer used was BTS Smart-DX, and six infrared cameras were installed within 5 m of the chair where the patient sat, adjusting the height and angle to include the patient’s movement, and perform calibration. Infrared markers with a diameter of 15 mm were attached (as below) to track trunk movement and the maximum activity range of the upper limb during each patient’s functional reach test. Infrared markers were photographed at 120 Hz with five attached to the acromions, the test side ulnar styloid, and both greater trochanters, and four attached to the back of the chair’s backrest. To calculate the infrared marker position in the 3D space, the marker model was set with a Smart Tracker (Smart Tracker, BTS Bioengineering, Italy) and analyzed with BTS SMART Analyzer software (BTS SMART Analyzer, BTS Bioengineering, Italy). The chair used for the measurement had no armrest and cushion. The height of the chair was set so that the patient’s hip and knee joints were flexed at 90°. Patients were instructed to extend an arm as much as possible by tilting the trunk forwards and sideways by 90° using the upper extremity of the dominant hand, and the maximum movement distance to the end was measured based on the first prepared posture based on the ulnar styloid and acromion.11 The functional reach test was performed three times before, and after, wearing the elastic aid to record average values.

The elastic trunk aid used a polychloroprene material with strong durability and sufficient flexibility (shore A hardness 40–90; tensile strength 60–250 kg/cm2; elongation 100–500%), and that is not damaged by external impacts. The trunk aid was manufactured to be 120 cm wide and 13 cm high, so that it had a wide contact area and could sufficiently wrap the trunk. Polychloroprene material is a material used to manufacture flexible aids that support the joints of the trunk, arms, and legs due to its high elasticity and strong durability. The elastic trunk aid was fixed with a velcro fastening after winding around the back of the chair and the body of the patient. The fixing position was between the iliac crest and xiphoid process, and the trunk aid was tightened as much as possible, while avoiding abdominal discomfort (Figure 1). Then, the functional reach test was performed according to the researcher’s instructions, and the researcher continuously observed the patient to prevent falls. 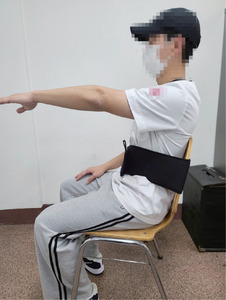 Fig. 1. Application of the elastic aid.

Data were analyzed using the SPSS 22.0 program (IBM Corp., Armonk, NY, USA) and described as mean±standard deviation (SD). The Wilcoxon signed-rank test was performed to compare the functional reach test results before and after fixing the elastic trunk aid. The statistical significance level was set as p&#60;0.05.

The lateral movement distance also increased after, compared to before, wearing the elastic trunk aid, but the change was not statistically significant (p>0.05)(Table 3).

In this study, the forward movement distance increased by 35% due to wearing an elastic trunk aid, which is similar to the distance increase produced by an exercise program in a previous study: Sliwinski et al.15 conducted an 8 week, complex exercise program in patients with spinal cord injury; with exercise progression and composition being 8 weeks, once a week, and 4 hours, consisting of resistance and aerobic exercise, body stability, and health education. Forward movement distance in the functional reach test increased by 18%, from 271 mm before exercise to 321 mm after exercise.

Based on the results of our study, when the elastic trunk aids was used, the movement distance increased significantly in the case of the forward movement during the functional reach test. However, in the case of the lateral, it was confirmed that the movement distance increased, but there was no significant change. In addition, it is believed that effective rehabilitation treatment will be possible if sitting posture balance training is performed using elastic trunk aids when treating spinal cord injury patients.